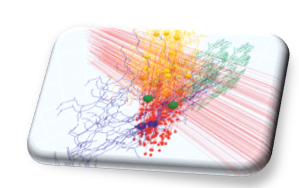 The course was designed with selected presentations and large space for hands-on experience. The attendees were introduced to the main  themes of cerebellum modelling and to the use of the HBP research infrastructures, BSP, NRP and future EBRAINS, addressing the principles of multiscale brain modeling.

In this Hackathon, the attendees elaborated and simulated computational models of neurons and networks of the cerebellum.

The event alternated presentations and tutorials with hands-on experience guided by an outstanding staff of scientists illustrating multiscale modelling techniques and applications. These included the use of pyNEST, pyNEURON and TVB with illustration of examples running on the Brain Simulation Platform and Neurorobotic Platform. All the software programs have been made available through a convenient Virtual Machine container that was uploaded on the BSP repository and pre-installed on the participants’ notebooks. The venue in Pavia proved quite convenient in offering the halls for talks and the open spaces needed for discussion and socialization. We think the event was quite successful in creating and consolidating working groups forming the core of a scientific community working around the HBP aims. The message passed nicely demonstrating the maturity of the HBP modelling system and infrastructure.

The focus on cerebellum allowed to illustrate specific use cases but also to extend them to a general modelling scheme applicable to other brain structures including the hippocampus, basal ganglia and cerebral cortex and to the whole brain. Productive discussions have developed on the future developments and EBRAINS, which we think will positively reflect into the work to be carried out in the continuation of the project. Very useful also the consolidation of working groups that have made the point on the ongoing works, from cellular level up to whole brain models, with identification of problems and elaboration of possible solutions to run them on BSP, NRP and TVB. The Hackathon was in streaming and has been recorded in full in digital format. The recorded version has been uploaded on the Brain Simulation Platform and on the Online Library of Public Education Training for further access and exploitation.